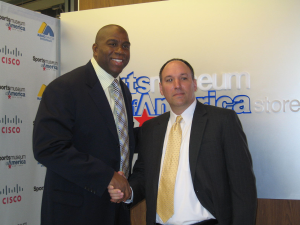 Magic Johnson shakes hands with a man at the Sports Museum of America in 2009. Photo Credit: Philipschwalb

On April 9, 2019, Magic Johnson, a beloved Los Angeles Laker, announced in a press conference that he would be leaving his position as president of basketball operations for the Los Angeles Lakers. This should be news, but it shouldn’t turn into a Kardashian episode, but Johnson made the announcement without alerting the Lakers organization prior. Talk about transparency. 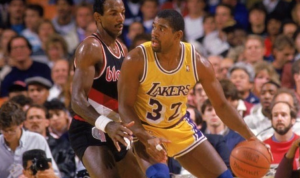 His comments opened a Pandora’s Box of controversy surrounding the Lakers ownership and who is actually in control of the organization.

Buss did not reassure fans of her abilities as a owner.

Instead of making it clear that she was unaware of Johnson’s leave, Buss posted  loving message to Johnson on Twitter.

Johnson called Buss’s ownership abilities into question when he left the organization, and Buss’s lack of response does not help fans feel any sort of validation in her ownership ability.

Buss had others make the statement.

Many people have speculated that LeBron James has been making the Lakers’ ownership decisions. This rumor was not hushed when James commented about Johnson’s sudden announcement, calling it a distraction from the team that was still finishing its season.

Buss has not stopped communication with Johnson. 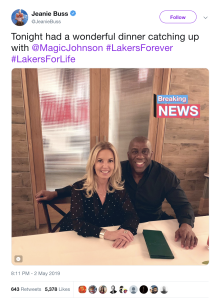 Buss posted with Johnson on May 2, 2019. Photo Credits: Jeanie Buss

While maintaining a relationship between the Lakers and Johnson is important, Buss should also be making it clear that Johnson is no longer involved in the Lakers’ operation.

Their relationship is also one-sided as Johnson has continued to make comments critiquing the Lakers’ ownership.

By continuing to share loving posts with Johnson, Buss presents also the argument that perhaps she still needs his leadership and guidance.

Buss did not provide stability for the organization.

Three days after Johnson left, the Lakers “mutually parted ways” with head coach Luke Walton. The one thing that the Lakers needed was stability, and Buss just continued to make others question her ability as a leader and drew further attention to the organization as a whole.

Additionally, there have been rumors that the Lakers will not hire a new president of basketball operations. Because of this job opening, there is more instability in the organization.

I need to take a breather. Ok. So, as a PR professional, what can you do to extinguish this fire?  Well, I have a few recommendations:

What do you think the Lakers’ PR team should do in response to this crisis? Let me know in the comments. 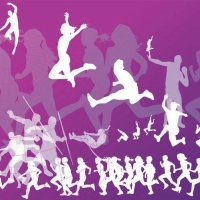 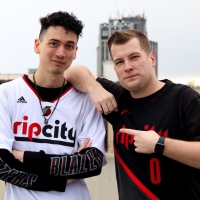 A Blog by Regan Simonson

A daily selection of the best content published on WordPress, collected for you by humans who love to read.

A Sports Blog About The Revisiting Of Basketball History